Start a Wiki
This article is an Incomplete Article, it requires editors to improve it.

The Pink Palace apartments, located in Ashland, Oregon, U.S.A., is a dilapidated mansion renovated apartment complex; once a house for one family, divided into several apartments. The house is 150 years old, according to Charlie Jones, which is the same age as the the beldam is estimated to be.

Wyborn Lovat, the grand-son of the Pink Palace Apartments' owner Mrs. Lovat, claims it is odd that the Jones family; Charlie and Mel and their only daughter Coraline, were allowed to reside as Mrs. Lovat usually hadn't allowed children to be there in the past.

An excerpt from the main article: Coraline (filmography)

There are three apartments, all of which are occupied. The door is a small, bricked-up crawl-space. The water boiler tank is in a special room, with faulty electrical wiring.

The stair-case from the cellar to the exterior has a chair lift installed for Miss Spink to use.

An excerpt from the main article: Coraline (books)

There are four apartments, three of which are occupied. The door is a large oak door. The water boiler tank is in the kitchen.

An excerpt from the main article: Coraline (video game)

The back door is located in Charlie Jones' office, at the end of the first floor corridor. 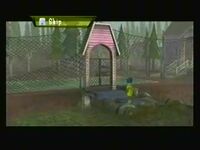 The tennis court is located in the back yard. It never made an appearence in the movie but only the video game.

The Garden is located in the back-yard of the Pink Palace. To get there, you need to pass the coraline's father's office door. In the beginning of the film, Coraline pass it to get to the orchard and find the old well. In the end of the film, Coraline, her parents and neighbors, including Wybie and his grandmother are in the garden planting red tulips.it is seen that the garden has the face shape of Coraline

The Barn is a creaking place that collapses everytime it was seen in the video game, one of the floors collapsed instead you have to walk on the cell bars.

The Barn is also seen in the film, but only as part of the background and the inside was not shown.

The Trail to the Orchard

The Orchard is where the well is and where Coraline Jones likes to explore. There are 16 trees there. From the orchard, you can see the Pink Palace Apartments. At the end of the orchard, Coraline meets Wybie for the first time when she is looking for the well at the start of the film. To get to the Orchard, you need to pass the garden and follow the trail to the hill. Down on the hills there are spruce forests, and near the well too. When Coraline goes to throw the key in the well, the trees are in bloom or Cherry Blossoms.

In the film, the orchard is on hight hill, but in the video game it is not.

The kitchen door is located in the kitchen, at the end of the first floor corridor. When you pass it, you are near the barn and the trail to the garden (the tennis court in the video game).

Entrance to Spink and Forcible's flat.

Forcible in the kitchen.

Coraline in the garden.

Coraline and her mother in their kitchen.

The Apartment in the Other world.

thumb|320px|The first part of the corridor

thumb|320px|The kitchen door, as shown in the video game

3o0px|The back door, as shown in the video game
Add a photo to this gallery
Retrieved from "https://coraline.fandom.com/wiki/The_Pink_Palace_Apartments?oldid=10009"
Community content is available under CC-BY-SA unless otherwise noted.