"No. I'm not the other anything. I'm me!"
— The cat, upon meeting Coraline Jones in the other world.

The cat is one of the major supporting characters of the story. He demonstrates the ability to appear and disappear on a whim, often to hide from danger or to help Coraline from danger. For unexplained reasons, he is able to speak in the other world.

An excerpt from the main article: Coraline (filmography)

In the movie, the cat is known to be Coraline's snarky and sarcastic companion. His first appearance was on the pathway to the well that Coraline was heading down, soon later being introduced by Wybie. He was described as "feral" and follows Wybie where ever he goes. Besides a few appearances, either snarling at her or playing the role of Wybie's companion, his first major appearance was when he suddenly started talking in the Other World. "You must be the other cat", said Coraline. " No, I'm not the other any thing. I'm me." (Those were quotes from the movie) He had a conversation with Coraline, spoiling that the other world was evil along with mentioning that he was insulted from Coraline remarking that he was a wuspus. Coraline thought that this was a bunch of nonsense, yet she was wrong. The next major appearance was when he was walking with Coraline through the "empty part of this world", revealing that " [Other mother] she only built what she knew would impress you" By these statements, the cat ended up helping Coraline quite a bit. He also warned Coraline while crawling through the portal that she was "falling right into her trap" and gave her the idea to play a game with the Other Mother. He helped her tremendously by giving Coraline the last ghost eye when she thought that she lost the game. His next appearance in the real world was when he growled at Coraline in a warning manner when she proceeded to discard the key. It was like he somehow knew that the other mother was going to attack and tried to warn her before it was too late. Luckily, Coraline and Wybie defeated the Other Mother's hand and smiled approvingly when he saw it being dropped down the well. He was included in the last scene when he went through one of his little portals to who knows where, hinting that not all was resolved.

An excerpt from the main article: Coraline (books)
The cat is mainly the same in the book as in the movie, except for being introduced by Wybie (judging the fact that he wasn't in the book at all. The main difference were the things that he said. For example, while Coraline was on her way to Ms. Spink and Forcible's performance, the cat mentioned how cats don't have or need names. Self-centered statements like this are things that annoyed Coraline. Another part that was cut out of the movie was when Coraline was trying to get information out of the other father when the other mother turned evil. He said that she was fixing the doors and windows to keep the cat (vermin) out. When Coraline mentioned this to him when they were "walking around the world", he simply chuckles and said that it wouldn't work. (See Coraline book to see all cat quotes) You can now safely assume that most of these quotes were irrelevant and that the filmmakers cut out these parts to get straight to the point. ​​​​​​​

The cat has the ability to seemingly vanish and reappear at will. This is never actually discussed in the movie, as his super-natural nature is demonstrated as oppose to described with words. In the movie, the cat's enigmatic nature is show, for example, with him showing off for Coraline by walking behind a log and exiting at a different place on that log; or, at the end of the movie where he vanishes by walking behind a sign-post and failing to reappear on the other side of it.

In the book, the cat is more implied to be some sort of other-worldly entity. He seems to understand the nature of the other world in full detail, including its history and the terrible truth behind its facade. The cat only disclose some of this information to Coraline Jones, keeping most information to himself. One such feature is his knowledge of secret entrances leading to the other world, he loses a great deal of confidence when these passageways disappear through the acts of the beldam.

When the beldam stated that she hates the cat animal, it is implied that she and the cat are arch-enemies in some manner. The cat's knowledge and ability to elude the beldam, despite her disfondness for him which implies that she would want to be rid of him, implies that he is her match, serving a good counter-part to her evil. Yet, the cat is only confident enough to match her when in control of a situation, such as knowing exits to the other world. In both the movie and the book, he lacerates and blinds the beldam in a bid to help Coraline secure an exit from the other world.

The cat appears to be sarcastic and ironical. Initially, the cat is impatient and sardonic toward Coraline for satirizing him and calling him a "wuss-puss," acts which he loathes with intensity. Finally, the cat slowly seems more attached to Coraline. According to Wybie Lovat, the cat is a feral animal, but Coraline and Wybie's acts of caring for the cat disputes the claim.

The cat has a habit of cocking its head, a habit shared with Wybie Lovat and a habit eventually adopted by Coraline. Its function appear similar to that of a greeting but may have other meanings.

When in the real world, for both the novel and the film, he seems to act much more like a cat would, such as enjoying being petted and hunting, and then bringing what he'd caught to Wybie. But in the other world the cat's behavior is more intellectual, as he understands what others say and can respond to what was said. He responds by talking, like a human. While in the real world he just understands what humans say, while being able to only reply with body language and cat sounds like meows and purring. 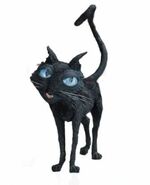 The Cat from Coraline, right after Coraline asks if he knew the well

Behind the Scenes look on Armaturist Jeanne McIvor working on The Cat from Coraline. 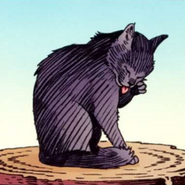 The cat in the graphic novel.
Add a photo to this gallery
Retrieved from "https://coraline.fandom.com/wiki/The_Cat?oldid=10441"
Community content is available under CC-BY-SA unless otherwise noted.